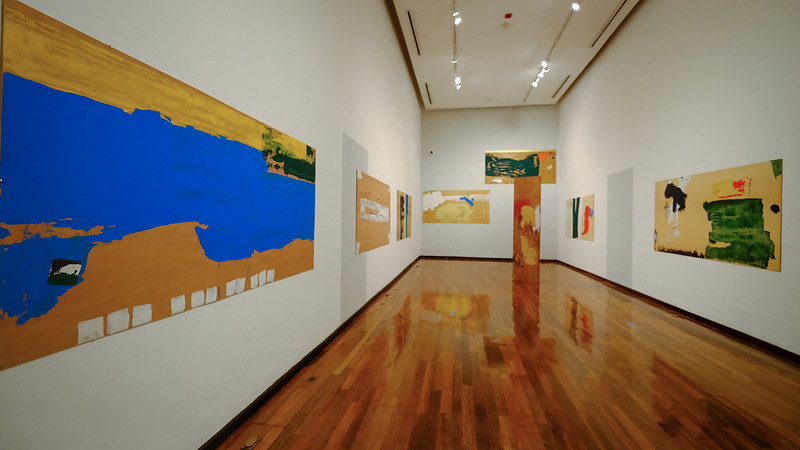 De cuando la Tierra era plana y los diamantes brillan [From When Earth Was Flat and Diamonds Shine] from the plastic artist Aníbal Delgado, gathers a set of pieces that share the characteristic of being painted on standard-sized wood panels. Aníbal Delgado parts from this limit to start building with paint, staples, papers, and pencils, this set of pieces which at first glance would seem as a showcase of gestures, and automation, but when regarded closely, an elaborate and conscientious technique appears instead.

Aníbal Delgado is an abstract painter, born in Guadalajara, Jalisco, in 1949. He counts over 40 years of experience in the plastic arts. He is considered a rara avis due to his stylistic freedom. He studied Plastic Arts in the Universidad de Guadalajara [University of Guadalajara], and the Escuela Nacional de Artes Plásticas de la UNAM [National Autonomous University of Mexico’s National School for Plastic Arts]. He has had individual exhibitions in diverse cultural spaces and galleries in our country and abroad. Among others, stand out the Galería La Mala Leche (2011), Galería Metropolitana (2010), Museo El Eco (2008), and Centro Cultural San Ángel (1991), all of these located in Mexico City; besides in the Mexican Cultural Institute of Washington, D. C. (2002). Delgado has also participated in collective exhibitions in Oaxaca, Ottawa, Zacatecas, San Antonio, and Brussels, among other places. In 2007, he received the Pollock-Krasner Foundation Grant.