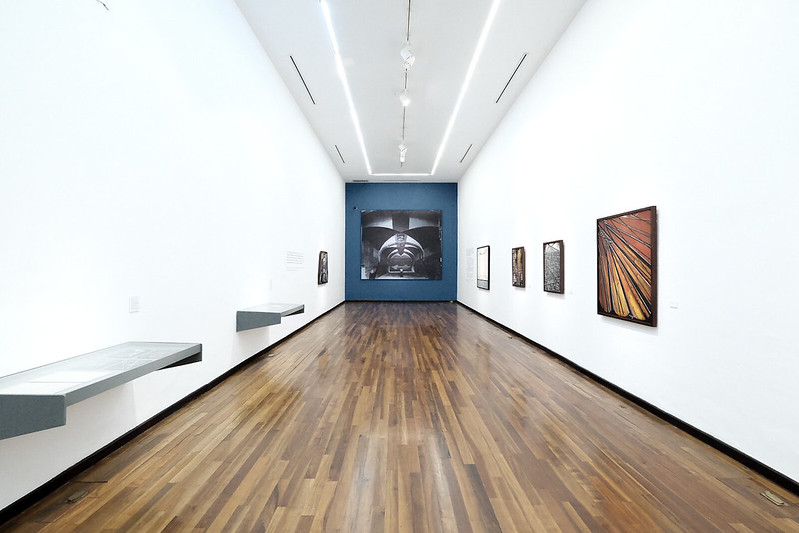 This review of the plastic and documentary collections investigates the use of geometry as a support for the constructive procedures that allowed David Alfaro Siqueiros to consolidate a pictorial proposal integrated to sculpture and architecture.

To do so, this exhibition uses a narrative based on the drawing entitled Portrait of the Tailor W. Kennedy published in the avant-garde magazine Vida Americana [em>American Life] (1921), edited by the master muralist and Catalan poet Joan Salvat-Papasseit. This work refers to William Kennedy Laurie Dickson, one of the inventors of the ocular mechanism called kinetoscope (1888) that produces the illusion of movement through photographic sequences.

In the 1930s, geometric forms and movement were central themes in Alfaro Siqueiros’ research. The artist sought to construct a new pictorial space that would allow interaction with the spectator, thus developing the concept of the “plastic box,” the starting point for what in the 1940s would become the concept of public art, an art for the masses that reflected social problems through the combination of painting, architecture and sculpture. “Artistic integration,” also linked to the use of new technologies, materials and tools, was one of the last chapters of Mexican muralism.

Within the context of the centennial celebrations of the Mexican muralist movement, these selected works show how constructive or geometric procedures were the cornerstone for the consolidation of a pictorial proposal based on the public function of art, as well as on the commitment to social transformation in the aftermath of the Mexican Revolution (1910-1917). In the avant-garde magazine Vida Americana [American Life], which also celebrates its centennial this year, there appeared what is considered one of the first manifestos of Mexican modern art: “Tres llamamientos de orientación actual a los pintores y escultores de la nueva generación americana” [“Three Appeals of Current Guidance to Painters and Sculptors of the New American Generation”]. In that text, David Alfaro Siqueiros wrote:

“[…] in modeling we are interested in epidermal arabesques and we forget to design the great primary masses: cubes, cones, spheres, cylinders, pyramids, which must be the skeleton of all artistic architecture. Let us painters superimpose The Constructive Spirit on the only decorative spirit; color and line are second order expressive elements; the fundamental, the basis of the work of art, is the magnificent geometrical structure of the form with the concept, interlocking and architectural materialization of the volumes and their perspective, which in these terms create the depth of the ‘environment’; ‘to create volumes in space.”

The visual narrative traced by the exhibition combines sequences in which geometric forms move from the representation of figures, as in Portrait of the Tailor W. Kennedy, to polyangular optical effects; in them, the angles and vertices of the architectural space disappear, while walls, ceiling and floor converge into a single unit. These effects can be seen in the sketches, documents and photomurals, as well as in the easel paintings and sculptural paintings in the exhibition. In this group, the pictorial display becomes volume in space: a forerunner of the integral constructions of properly kinematic and dynamic spaces, or rather, plastic boxes for a viewer in constant movement.