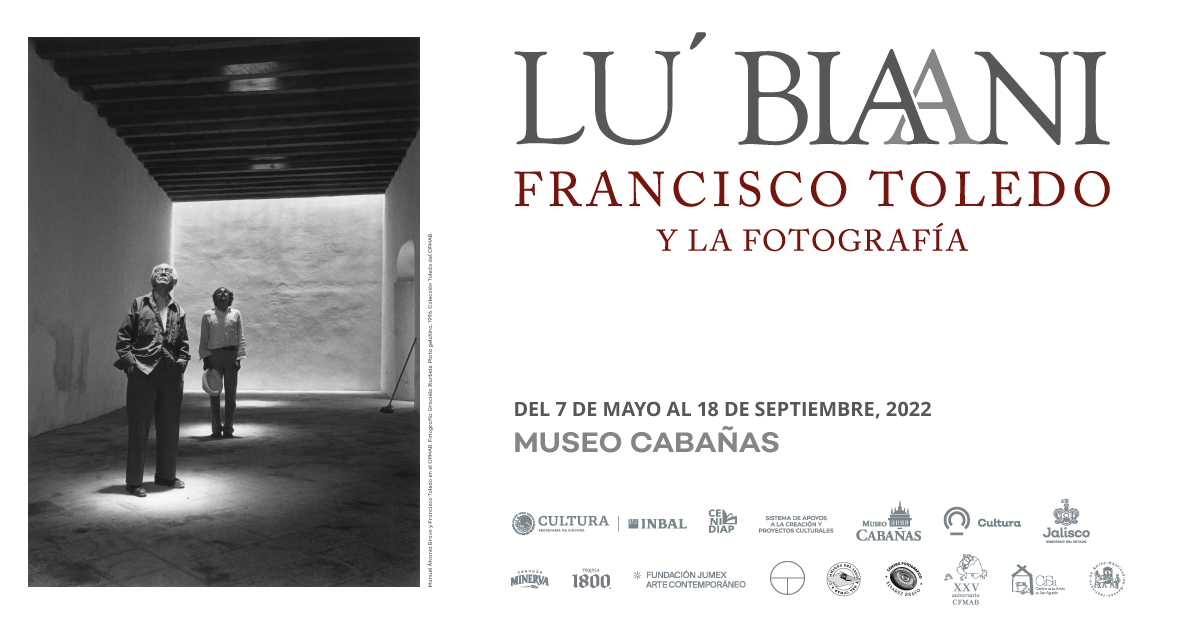 With the presence of our guest curator, researcher Alejandro Castellanos, the exhibition will encompass many genres, from the onset of the 20th century and up to our days, and include more than four hundred works from some of the most recognized photographers of Mexico and the world, as well as documents, art pieces, and art installations that form part of the CFMAB’s archive in Oaxaca.

Francisco Toledo was curious about the creations of other artists, among them Álvarez Bravo, whose artwork ignited in the young Toledo the notion of exploring the world through light captured by a lens. Hence Lu’ Biaani, the exhibition’s title, Zapotec words that mean “eye of light”. This is the core of the exhibition, which intends to show us the influence that the artist from Oaxaca had in the transformation of this artistic discipline in Mexico in the last quarter of the century through the promotion of other’s work, the creation of an archive, and the foundation of a space such as the CFMAB, who now homages the photographer that shook it.

In words of our curator, this exhibition shows us that “the creative universe of master Toledo is ample, and a significative part of it is his relationship with photography, which always occupied an important space in his life and is visible in the books he edited, the photographic and bibliographic collection that he assembled, the creation of the Centro Fotográfico Manuel Álvarez Bravo, and above all else, the educative labor that he enacted through this venue and the Centro de las Artes de San Agustín (CaSa)”.

The exhibition, that also commemorates the 25th anniversary of the Centro Fotográfico Manuel Álvarez Bravo, founded by Francisco Toledo in Oaxaca, is divided in three thematic axis or cores, where not only are displayed the works of Toledo but also that of other authors who studied both at CFMAB and at CaSa, both in Oaxaca. We are shown part of Toledo’s collection and what the photographic center has generated in the past two and a half decades. In a different section, artworks from the author are shown, those in which he expresses, in a fun and open manner, his connection to fix images with a composition of original images created by other artists.

The investigation that holds this exhibition started through the program Colección en vivo, which had place in CFMAB and CaSa between 2015 and 2018 and gave the opportunity to study the Toledo Collection of Photography and create a seminar around it. Said archive is part of Amigos de IAGO and CFMAB, A. C., a civil association where the artist born in Juchitán impulsed many educative and cultural projects.

Throughout nine sections, Lu’Biaani: Francisco Toledo y la fotografía displays a panoramic view of relationships that conform the universe and the impact of the artist in his art, acknowledging the importance of his work.

I. Yo, otro (I, Other)
For Francisco Toledo, photography was the means and the ends. A way of remembering, of appropriating his own image and seeing himself through the eyes of others. More than anything else, it was a way of assuming power through media to create images and imaginaries linked to his modern, documentary, and artistic condition. His photography, often experimental, compliments his graphic and pictorial work, in the same way his own image, captured by various photographers, compliments the image he managed to create: the artist immersed in his world, a representation of himself as the Other that other people perceive. Pictures by Francisco Toledo, Graciela Iturbide, Rogelio Cuéllar, y colaboraciones de Francisco Toledo con Iván Alechine, Rafael Doniz, Trine Ellitsgaard, and Raphäel Confiant, among others.

II. Coleccionismo, canon y medio (Collecting, canon and media)
Through the years, Francisco Toledo assembled one of the most notable photography collections in Mexico and Latin America, not just due to the authors that created them, but also the way they were integrated into the collection. Likewise, his friendship with Roberto Donis was important for the collection: the transformation of an image archive to a repository where the functions of photography as a social and iconic referent can be interpreted in several ways.

III. Centro Fotográfico Manuel Álvarez Bravo: Un cuarto de siglo (Manuel Álvarez Bravo Photography Center: The quarter of a century)
Two thousand and twenty-one marked the 25th anniversary of the foundation of the center that Francisco Toledo created with the help of numerous photographers, artists, curators, and managers. A project that has functioned as the heart of photography’s development in Oaxaca through his program of exhibitions and workshops, which have fostered the growth of two generations of photographers: the one that consolidated at the beginning of the CFMAB, and the one the one that came after them. The latter, following the teachings of the former, gave a new dimension to the practice of photography in Oaxaca, and thus motivating the growth of a public interested in static pictures.
Pictures by Manuel Álvarez Bravo, Daniel Weinstock, Jorge Acevedo, Juan Carlos Reyes, Marcela Taboada, Cecilia Salcedo, Vitorio D’Onoffri y Domingo Valdivieso.

IV. Comunalidad (Communality)
Communality is the term that some Zapotec intellectuals (Floriberto Díaz Gómez, Jaime Martínez Luna) have coined to describe the way of living of villages in Oaxaca, which can be extrapolated to diverse ways of cultural creation, such as the formation and reach of the Toledo Photography Collection, that showcases the range of image as a support for collective and individual memory of habits, work, and relationships of the people that live in the countless communities that form the constellation of Oaxaca.
Pictures by Sotero Constantino Jiménez, Ignacio Zanabria, Graciela Iturbide, Rafael Doniz, Eniac Martínez, Maya Goded, Jorge Lépez, Jorge Santiago, Octavio López, Eva Lépiz, and Taller fotográfico de Guelatao.

V. Germinal
It all begun in Juchitán, in the early 70s, when Francisco Toledo, along with artists and intellectuals, mainly Víctor de la Cruz, Macario Matus, and Elisa Ramírez, actualized the rich spring of Zapotec culture in the Isthmus of Tehuantepec by recovering his recent history and projecting it amidst an affirmation of political autonomy that shook Mexico: the first local government won by leftists after an unprecedented mobilization. Memory of this conflict, and that of the events of 2006, serve to remind people about the constant political fight that lies in the state, and the importance of photographic evidence like that of both affairs.
Pictures by Fondo José F. Gómez, Rafael Doniz, Graciela Iturbide, Lourdes Grobet, Marco Antonio Cruz, Fabrizio León, Heriberto Rodríguez, Eleuterio Xagaat, Luis Alberto Cruz, Jorge Luis Plata, Antonio Turok e Ilaria Gabbi.

VI. Mito y mirada (Myth and Glance)
In the last thirty years of the 20th century, the history of photography was constructed in Mexico, of which several authors stand out and whose images helped consolidate a powerful myth: the unity of Mexican picture due to its closeness to pop culture. Following this perspective, and parallel to its development, the Toledo Photography Collection integrated some of the photographers that shaped the historical canon of Mexican photography.
Pictures by Romualdo García, Guillermo Kahlo, Hugo Brehme, Lola Álvarez Bravo, Nacho López, Juan Rulfo, Aarón Pérez Yescas, Jorge Brena, Mariana Yampolsky, and Carlos Blanco.

VII. Entre mundos (Amidst worlds)
Several photographers and researchers from the United States have arrived at Oaxaca with the intent of understand its ethnographical and cultural complexity. The riches of its daily life, its celebrations, and the diversity that characterize the lifestyle of Indigenous villages have fostered interest in documenting it and the possibility of building bridges between those manifestations and the American perspective, as it occurred in the exhibitions of many photographers in the CFMAB, and mainly with Mary Ellen Mark, who, after fifteen year of friendship and collaboration with Francisco Toledo, kept a yearly workshop at the CFMAB, where the fruits of this friendship have been showcased and have enriched the contents of the Toledo Photography Collection.
Pictures by Frederick Starr, Donald Cordry, Tony Gleaton, Vicki Ragan, Mary Ellen Mark, Edward y Kim Weston, Fondo La Raza, Colección Iturribarría de postales.

IX. Al alba (At Dawn).
The first twenty years of the 21st century have witnessed the consolidation of photographers that started their work in the last years of the previous century as well as the appearance of a new group of authors that have been educated in the many spaces that showed up with these movements. The favorable conditions for the creation and development of photography as promoted by the CFMAB and CaSa (the last institution established by Francisco Toledo) have achieved unrivaled relevancy since their workshops have developed some of the most recognized authors of contemporary Mexico.
Pictures and works by Lola Medel, Karina Juárez, Koral Carballo, Yael Martínez, Paola Dávila, Fausto Nahúm, Mariela Sancari, Luis Arturo Aguirre, Nelson Morales, Roberto Tondopó, Abril Salgado, Citlali Fabián, José Angel Santiago, Claudia López Terroso, Javier León Cuevas, Julio Barrita, Regina Mejía, and Baldomero Robles. 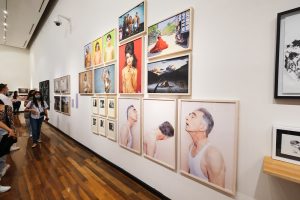 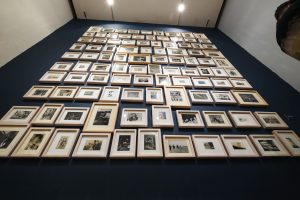 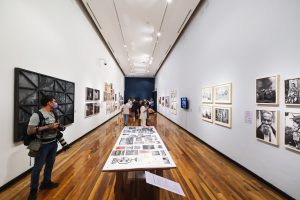